With the wide selection of scroll saws and significant variance in their prices, picking the right scroll saw for your tasks is exceptionally important. When looking for a scroll saw, you would want to find a tool that is just right for you in terms of both price and features.

If you happen to be searching for a good mid-end scroll saw, then Delta scroll saw could be the right choice for you. This tool appears to be an excellent product thanks to its good balance between price and performance. But is it an excellent option for you?

The first and most important advantage of Delta Power Tools 40-694 scroll saw is its performance. Since this scroll saw is designed for pinless blades, it should be very good for fine detailing work.

Delta scroll saw operates on speeds from 400 to 1,750 strokes per minute, which should allow you to cut through both soft and hard kinds of woods reliably. Aside from that, because the blade arm pivots instead of moving up and down, this scroll saw operates with significantly reduced vibration and noise. 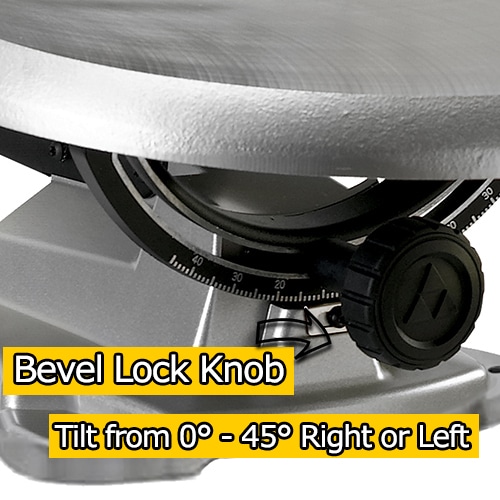 Measuring 16 by 24 inches, the iron-cast table of this scroll saw has quite a large surface. The table can also be tilted for up to 45 degrees to either the left or right, which makes Delta Power Tools 40-694 scroll saw more convenient for angle cutting. If you don’t like this feature, take a look at Excalibur scroll saws which have tilting head feature.

20 inches of throat depth of this scroll saw is quite good, given that the depth of scroll saws usually goes up to 22 inches. The 20-inch throat depth will allow you to cut into the material quite deep before it hits the frame.

Delta Power Tools 40-694 scroll saw has a fairly long and flexible dust hose blower. The hose is designed to be easily adjusted to allow for more convenient dust removal while working on workpieces of varying size.

A common feature of scroll saws is a dust port that allows the connection of dust bags or vacuum cleaners. However, the Delta scroll saw doesn’t come with one, instead fully relying on the included dust blower. This could be an issue for those who prefer to work with dust bags.

Aside from dust blowers, scroll saws typically feature onboard lights. Delta scroll saw doesn’t include any inbuilt lights, which is pretty much a must-have feature for precise woodworking. However, Delta offers this scroll blade with light and stand as well, but that option costs a couple hundred dollars more.

The upper arm of this scroll saw is designed to be lifted up to allow for easier threading of the blade through the workpiece for fretting. The upper arm can be fixed in the raised position via a button located on the rear end of the device.

However, the position of the arm lock button is the bad thing about the arm. The upper arm lock is positioned at the back end of the scroll saw, which makes reaching it without standing up quite difficult. 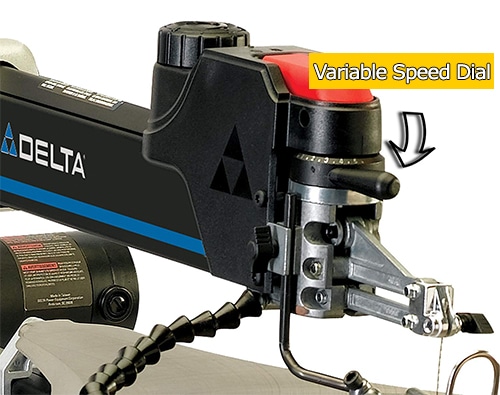 The speed of the Delta Power Tools 40-694 scroll saw is adjusted via the dial located on the top of the arm. It allows for flexible adjustment of the speed within the 400 – 1,750 SPM range.

To increase the accuracy and the lifetime of the blade, Delta Power Tools 40-694 scroll saw allows blade tension adjustment. The blade tension is adjusted via a lever just above the blade arm. The design of the lever makes applying force while tightening the blade fairly easy.

While we are still examining dials and buttons, we should mention the power button as well. The large size of the power button certainly makes it easier to use. However, it is larger and more out in the open than it should be: for example, while adjusting the tension of the blade, you could accidentally turn the tool on if you are not careful.

This scroll saw features tool-free clamp locks to fixate the pinless blade in place. To change the blade, you just need to rotate the clamp, take out the blade, put another one, and lock the clamp.

When comparing Wen 3920 to the Delta scroll saw, the latter definitely appears to be a superior tool. While Wen 3920 has some advantages over Delta’s saw like an inbuilt light, two-direction blade installation, and a much more attractive price, we think that it can’t really compare with the reviewed scroll saw. To be fair, that’s what you would expect from a scroll saw with a $100 price tag.

Firstly, Wen 3920 is much lighter and thus appears to vibrate much more during operation. Aside from that, its noise levels are also higher. The bad thing about the increased vibration is that it can shorten the lifetime of the saw, not to mention that it is simply annoying.

Secondly, Wen 3920 doesn’t have as much performance capacity with pinless blades. While it supports both pinned and pinless blades, its operation is much weaker with the pinless ones.

To install a pinless blade in Wen 3920, you would need to put the two included adapters on the blade’s ends and then hook them onto the clips below and above the table. Not being securely held in place by clamps, the blade is kept in place thanks to its tension. Needless to say, this isn’t nearly as reliable as it is with Delta scroll saw, not to mention that you need to use tools for the installation of the adapters on the pinless blade.

There are some other, smaller differences between the two scroll saws, but the aforementioned should be more than enough to give you an idea of the superiority of the Delta scroll saw.

Things are slightly more difficult with DEWALT DW788. Although the DW788 is noticeably more expensive than the Delta scroll saw, it appears not to have as many advantages as one would hope.

In terms of performance, both scroll saws appear to be pretty similar. They have the same pivoting blade arm design that reduces noise and vibration. Besides, they have almost the same table size and the same stroke speed.

The most evident advantages of the DW788 is its free non-locking arm and the safer power button that is less prominent. However, when it comes to the arm, things aren’t that simple: while you don’t need to press any button to lift the arm, you need to hold it with your hand while threading the blade through the material.

All in all, the Delta scroll saw appears to be a much better choice for the price, given that DW788 doesn’t have that many advantages over it.

Delta scroll saw truly appears to be an excellent pick for the price, even more so when compared to affordable saws like Wen 3920 and expensive models like DEWALT DW788.

Being a more expensive tool, Delta Power Tools 40-694 scroll saw has many advantages over the inexpensive Wen 3920. And even though Delta’s tool is noticeably cheaper than DW788, it appears not to fall behind considerably in terms of features. Delta scroll saw seems to have a very appropriate price for its features, which could make it a great option for you.